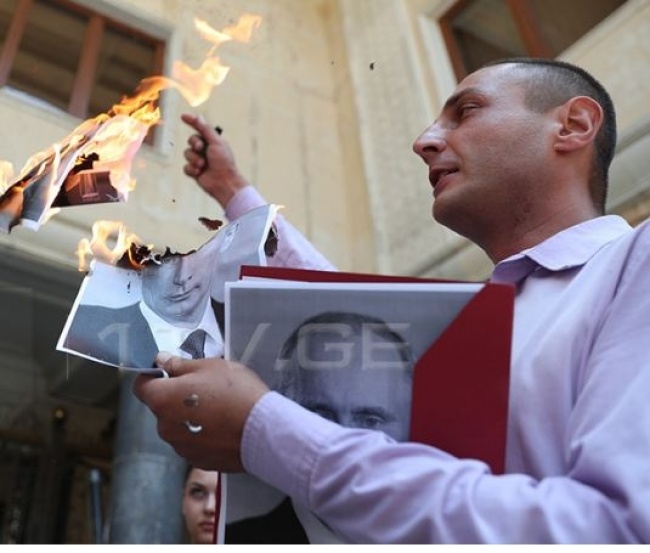 MOSCOW — Tensions between Russia and Georgia sharply escalated Monday after a television host in the former Soviet republic unleashed an expletive-laden tirade directed at President Vladi­mir Putin, provoking a rebuke from the Kremlin and condemnation within Georgia.


The on-air rant, broadcast Sunday evening, came after two weeks of violent anti-Russian demonstrations in the Georgian capital, Tbilisi, culminating in a Russian government ban on direct flights between the two countries. The ban took effect Monday, disrupting travel for thousands of passengers.

Speaking in Russian, Rustavi-2 host Giorgi Gabunia turned to the camera to address Putin. He called the Russian leader a “stinking occupier” and a rash of obscenities, told him to “f--- off,” cursed his dead parents and promised to defecate on his grave. Gabunia also called Russians “slaves” and told them to immediately get out of Georgia.

Ties between the neighbors are at their worst point in years. In 2008, hostilities erupted into a brief war when Russia backed the breakaway South Ossetia region, and Russian troops invaded Georgia proper. Relations gradually got back on track, with trade and tourism between the two fully reestablished by 2013.

But there are sharp divisions within Georgian society about what role its much larger, politically influential northern neighbor should play. Polls show that the majority of Georgians favor joining NATO, which would infuriate Russia. A riot police officer fires a tear gas canister at protesters during a rally against a Russian lawmaker’s visit in Tbilisi, Georgia, on June 21, 2019. (Irakli Gedenidze/Reuters)

The anti-Russian protests were sparked last month when a Russian lawmaker, invited to address Georgia’s Parliament, delivered a Russian-language speech from the speaker’s chair. Furious protesters tried to storm Parliament, and police acted quickly. Since then, protesters have staged daily demonstrations to demand the resignation of Interior Minister Giorgi Gakharia over the police crackdown, which injured several people. Russia has blamed the protests on the United States.


Georgian President Salome Zurabishvili and Prime Minister Mamuka Bakhtadze condemned Gabunia’s TV performance as a “provocation.” Both leaders are backed by the ruling Georgian Dream party, which has moved to forge closer ties with Russia in recent years, angering the opposition and many ordinary Georgians, who see Moscow as an occupier.

Russia has military bases in South Ossetia and the other breakaway region, Abkhazia — two regions that make up a fifth of Georgia’s territory.

The Russian Duma, or lower house of parliament, said it would put Gabunia on a wanted list and seek his extradition so he can be tried in a Russian court, although it was not clear what he would be charged with.

The opposition-owned Rustavi-2 channel, which was picketed by protesters opposing the anti-Putin diatribe, went off the air for six hours Monday after some of its workers were hurt in the demonstrations. Thousands of Georgian opposition supporters protest in front of Parliament in the capital on June 21, 2019. (EPA-EFE/Shutterstock)

Some Georgians worry that the government’s condemnation of Gabunia’s actions could work in Moscow’s favor.

The travel blockade on all Russian and Georgian flights operating between the countries poses a serious economic challenge to Georgia. The southern Caucasus country, which has a population of nearly 4 million, receives about 1 million Russian visitors a year. Although Russian tourists will still be able to enter Georgia by road or indirect flights, the financial blow to Tbilisi is expected to be considerable.

Russia has said the ban, which was signed by Putin, is intended to protect its citizens from “Russophobic hysteria.” Some Georgians have responded to the measure by creating the social media campaign #SpendSummerInGeorgia, hoping to attract non-Russian tourists to visit the country’s Black Sea coast and spectacular mountains. The U.S. Embassy in Tbilisi joined the campaign.

Separately, the Russian Duma said Monday that it would ask the government to ban imports of Georgian wine and mineral water, as well as freeze money transfers between the two countries.

Georgia’s wine — a hallmark export that belongs to a viticulture tradition going back 8,000 years — is beloved by Russians, and its sale often has been viewed as a barometer of relations between the former Soviet countries.

Russia previously banned Georgian wine imports between 2006 and 2013 over what Moscow described as poor quality standards, but Russians and Georgians alike largely viewed the move as politically motivated.