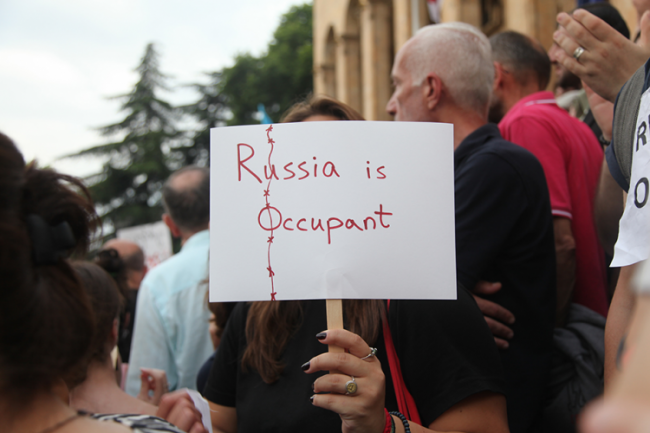 Signs of a crisis in Georgia emerged on June 20, when Georgian citizens watched how lawmaker from Russian Duma - Sergei Gavrilov, was invited by the Government of Georgia to the international Orthodoxy conference in Tbilisi. Gavrilov sat on the chair of the Speaker of Georgian Parliament and the protest started right outside the Parliament Hall, and many people gathered in front of the Parliament that evening.
Police and riot police blocked all entrances to parliament. The rally was attended by political leaders of opposition parties, including Shalva Natelashvili, leader of the Georgian Labor Party. Later, the people wanted to enter the parliament yard, and the riot police started shooting in the direction of the people. More than 250 people were injured, 2 lost their eyes. The Prosecutor's Office found no one as a victim. Police have arrested dozens of young leaders and two political leaders, MP Nika Melia on probation, while Irakli Okruashvili is in jail, accused of state coup by the authorities, which, based on the facts, is out of the question
After that, youth movements held rallies in front of parliament for almost two months, demanding the resignation of Interior Minister Giorgi Gakharia. June 20 was called "Gavrilov's Night".
De facto Georgian leader Bidzina Ivanishvili, leader of the Georgian Dream party, has offered the country to switch to an electoral-proportional system that has been demanded by the Labor Party for years. This offer has really slowed the protest, as there has been a chance and hope for a change in oligarchic rule. A proportional electoral system, with zero barriers, could have some political power in the next parliament, create a coalition government and end a one-party government that did nothing good for the country. In October, Giorgi Gakharia became the prime minister, instead of removing him from office and in November government refused to change the electoral system. They blamed their majoritarian lawmakers for blocking the bill. „If the country goes to a proportional electoral system, the Georgian Dream loses the elections, they know it and that's why they are blocking this bill.“ – Shalva Natelashvili, leader of Georgian Labour Party said after the bill failure.